The full name of the RJ45 connector happens to be the RJ45 8P8C plug. That just means it has eight positions and eight conductors in total. It is a modular connector for telecommunications and networking that can be adapted to your needs. As for its modern applications, it is mainly used to connect computers to LAN networks. You can learn more about RJ45 connectors by following factors one by one:

While we’ve illustrated and explained some of the main importance of the RJ45 connector, some of you may also be interested in learning more about its name. RJ45 stands for Registered Jack 45, where the number 45 refers only to the standard shape of this connector.

As for the registered jack part, it just means that RJ45 is the physical standard used for network interfaces in various applications. As a physical standard, it sets the standard for wiring patterns used for RJ45 connectors. You can also find other RJ standard types of connectors such as RJ11, RJ14, RJ25, etc., which all have different sizes and functions.

Although RJ45 is used for various purposes, its construction is very simple because of its limited number of parts. In any given Rj45 connector you will find the following parts:

RJ45 wiring
As mentioned earlier, RJ45 is a highly modular 8P8C connector as it supports different wiring configurations. While you can make every possible combination, two very popular combinations include CAT5 and CAT6 cables. These are also known as T-568A and T-568B standards and they use the same connectors but have different wiring as shown:

Whether you’re connecting computers to each other to form a local area network, or you want your system to be connected to the Internet, RJ45 allows you to do both. As for its original application and design reasons, RJ45 is mainly used in telecom and telephony applications to connect devices over long distances for communication. 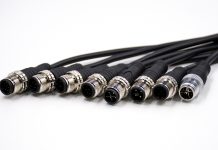 What do you know about m12 to rj45 ethernet cable?

Introduction of RJ45 interface and characteristics

Three major factors that cause connector terminals to fail

Tips for selecting a rocker switch